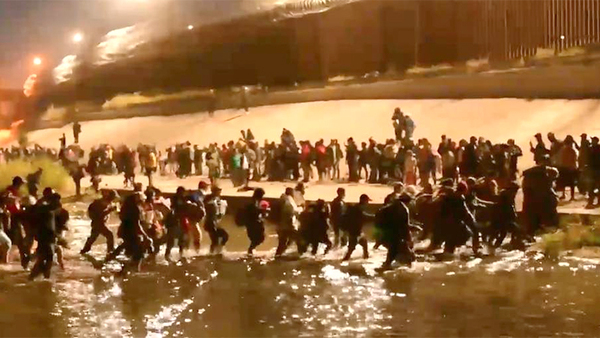 WASHINGTON, D.C. (Texas Insider Report) — U.S. Customs & Border Protection authorities announced late Friday that they had stopped 251,487 illegal immigrants along the Mexican Border in December 2022 – the highest number of illegal border crossings recorded during any month of Joe Biden's presidency – which represents a 7% increase from the 234,896 apprehensions in November 2022, and a 40% increase from the 179,253 apprehensions one short year ago in December 2021.

"Even as overall encounters rose because of smugglers spreading misinformation around the court-ordered lifting of the Title 42 public health order, we continued to see a sharp decline in the number of Venezuelans unlawfully crossing our southwest border, down 82% from September 2022.”

In response to the huge increases in numbers – and the Biden White House's statements – Texas Congressman Pat Fallon tweeted:

Though he had long resisted issuing a "State of Emergency" declaration, El Paso's Mayor Oscar Leeser in mid-December declared a "State of Emergency" because of the onslaught and worsening immigrant crisis, as the West Texas city – and all of South Texas – became overwhelmed with illegal immigrants who were being released by Federal Authorities (to pursue their immigration cases at a later time,) into the U.S. during the weeks leading up to President Joe Biden's first visit to the border as president on January 8th.

The increase in border crossings and releases left scores of illegal immigrants sleeping on the streets – and even in El Paso International Airport.

"The situation has superseded our local governments' capacity, and... I support the city of El Paso's Declaration of Disaster to activate a whole-of-government approach to addressing this unprecedented crisis."

"This is bigger than El Paso," said Mayor Leeser.

"This is a United States issue (about) working with each other."

The remarkable number of idividuals finding their way to El Paso in December made the city the busiest of the Border Patrol's nine sectors on the Mexican border – for a third month in a row.

After Friday's release of December's numbers, the Biden Administration blamed the surging figures on the increasing Cuban and Nicaraguan citizens who were making their way to El Paso, and pointed to the number of Venezuelan arrivals declining to below September 2022's highs, when the South American country was the second-highest nationality at the border after Mexicans.

Biden said earlier this month that the U.S. would admit up to 30,000 people a month under "humanitarian parole" from Cuba, Haiti, Nicaragua and Venezuela, allowing them to live and work in the united States for two years if they apply online, pay airfare and find a financial sponsor.

“We look forward to sharing the additional data in the next update,” he said in a news release.