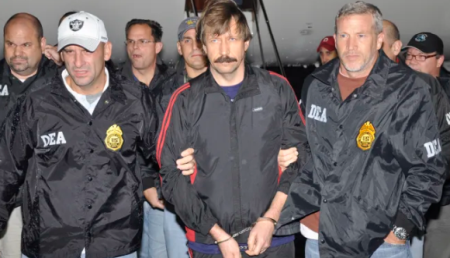 Viktor Bout, being escorted by U.S. Drug & Enforcement (DEA) Agents, arrives at the Westchester County Airport in White Plains, N.Y., in 2010. by N/A is licensed under N/A

WASHINGTON, D.C. (Texas Insider Report) — After being found guilty on four counts of conspiring to kill Americans and U.S. Officials, acquiring and exporting Anti-Aircraft Missiles, and sending arms to aid a Terrorist Organization, in April of 2012 convicted and notorious arms trafficker Viktor Bout began serving a 25-year prison sentence in the United States of America.

In 2010, John Brennan – then-President Barack Obama’s Deputy National Security Adviser for Homeland Security & Counterterrorism – said in an interview that capturing, trying, and convicting Bout was crucial to thwarting the flow of illegal arms to dangerous and known Terrorist Entities.

On Thursday, after "months of" negotiations, President Joe Biden signed a Commutation Order ending Bout's prison term and freed him early in a one-for-one prisoner exchange for U.S. basketball player Brittney Griner – who was convicted of drug charges in Moscow on August 4, 2022 and has been jailed in Russia ever since.

Bout was arrested and extradited from Thailand in 2008 after being captured in a sting operation conducted by the U.S. Drug Enforcement Agency. DEA agents secured a meeting with Bout (at right, arriveing at Westchester County Airport in White Plains, N.Y., in 2010,) by posing as members of the Marxist-Leninist Guerrilla organization Revolutionary Armed Forces (FARC) of Colombia, a U.S. designated terrorist group interested in buying tens of millions of dollars of arms.

During the trial, Bout maintained his innocence, saying he “never intended to kill anyone” and “never intended to sell arms to anyone.” But prosecutors argued that Bout was aware the weapons he sold would be used against Americans.

Beyond sourcing the arms throughout his criminal career, Bout physically transferred them to buyers too, using a fleet of Soviet-constructed planes.

“There’s a lot of armed traffickers out there,” Rob Zachariasiewicz, a now-retired U.S. Drug Enforcement Administration Agent who helped apprehend Bout in Thailand.

From the fall of the USSR until his arrest in 2008, Bout violated numerous Arms Embargoes, including in Liberia, Afghanistan, Sierra Leone, Congo and Libya.

Jonathan Winer, a senior official in the U.S. State Department during the Clinton Administration – who was steeped in knowledge of Bout’s arms ventures – told Yahoo News that Bout was once the 2nd-most-wanted man in the world... after Osama bin Laden.

Bout – who has been serving his 25-year sentence in a medium-security penitentiary in Marion, Illinois – got his start in the arms trade by selling weapons to participants on both sides of the Angolan Civil War in the late 1990s, undermining U.S. efforts to try and bring the bloody conflict to a peaceful resolution.

Witney Schneidman, who became aware of Bout’s involvement in the Angola conflict while serving as Deputy Assistant Secretary of State for African Affairs, called him “the personification of evil.”

Bout was “directly undermining our efforts to bring peace,” Schneidman told the New Yorker in 2014.

Prosecuting and convicting him, Brennan said, was very important:

...so “we’re able to stop these illegal arms traffickers from carrying out their activities – which are undergirding the ability of Terrorist Organizations and other groups to carry out attacks nationwide.” 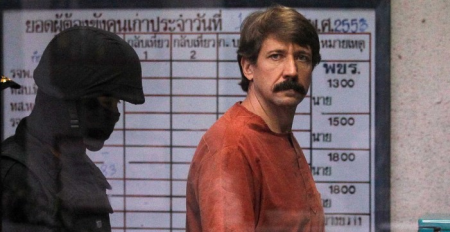 “Victor Bout is somebody who – for two decades – was responsible for arms trafficking and supporting Terrorist Organizations on multiple continents, South America, in Africa and in Asia,” Brennan said.

Similarly, in 2011, President Obama's Attorney General Eric Holder said Bout’s conviction (at right, being escorted by the Special Police as he arrived at a Bangkok, Thailand Criminal Court on October 4, 2010,) was a major success of the justice system, and of government agencies that brought him to justice.

“One of the world’s most prolific arms dealers is being held accountable for his sordid past,” said Holder at the time.

“Viktor Bout’s arms trafficking activity – and support of armed conflicts – have been a source of concern around the globe for decades.

"Today he faces the prospect of life in prison for his efforts to sell millions of dollars worth of weapons to terrorists for use in killing Americans,” Holder said. 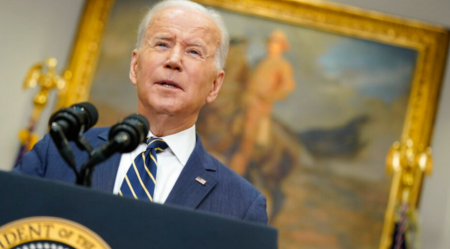 The real and serious questions upon the one-for-one Bout-for-Griner prisoner swap clearly should be,

"What is an appropriate concession for the United States and its President to secure the release of its citizens?"

And, "Does the payment of the ransom make future problems like this more likely?"

The question being asked as to whether or not Brittney Griner's "suffering" should have come to an end is a distracting and silly question. The U.S. never wants to see its citizens unfairly detained under brutal conditions on trumped-up charges.

However, “Is it in the interest of the U.S. Government to have secured the release of Brittney Griner at such a grave cost?”

At the time of his April 2012 sentencing, prior to his now commuted 25-year conviction, the then-45-year-old Bout told New Yorker Magazine:


“They will try to lock me up for life, but I’ll get back to Russia. I don’t know when, but I’m still young.

"Your empire will collapse, and I’ll get out of here.”

Viktor Bout, being escorted by U.S. Drug & Enforcement (DEA) Agents, arrives at the Westchester County Airport in White Plains, N.Y., in 2010. by N/A is licensed under N/A