China's President Tells Biden: 'Play with Fire & You Will Get Burned' 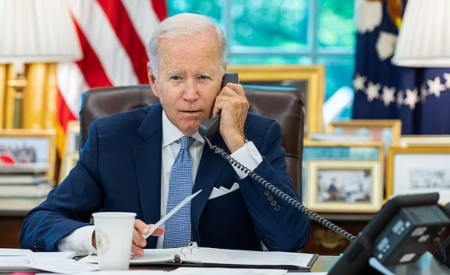 President Biden posted an image to his Twitter account from Thursday morning's 2-hour-long phone call with Communist China's President Xi Jinping – the 5th between the two since Biden took office. by N/A is licensed under N/A

WASHINGTON, D.C. (Texas Insider Report) — As tensions between the two countries escalate, Communist China's President Xi Jinping told President Joe Biden during a two-hour phone call this morning that, "Those who play with fire will get burned. We hope the U.S. side can see this clearly," while adding that the People's Republic of China firmly opposes independence for Taiwan – and the interference of external forces.

The call comes as China has increasingly stated it is not pleased with the prospective visit to its neighboring island by House Speaker Nancy Pelosi, and as Taiwan is ramping up its largest ever military drills. 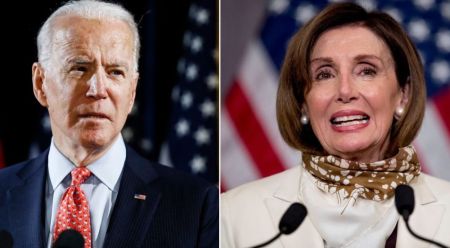 Following recent reports of Pelosi's travel plans, China's Foreign Ministry on Tuesday, July 19th vowed that the nation would take "resolute and forceful measures" if the trip was carried out. Beijing says it would view Pelosi's visit as a provocation.

Chinese press reports have said Taiwan will "bear the wrath of Beijing" should Pelosi's visit to the island go forward.

U.S. military leaders have also warned Biden of the escalating warnings and emerging threat from China, and claim Pelosi's trip to Taiwan could cause ripple effects.

Beijing is likely to ramp up military pressure on the island during Pelosi's time there.

"Possible action, the most likely scenario, includes sending multiple warplanes across the median line that separates the Taiwan Strait – especially at the area between Taipei and Hsinchu, which is the narrowest point in the Taiwan Strait," said Chieh Chung, a senior researcher at Taiwan’s National Policy Foundation think tank, noting that this happened when former U.S. Undersecretary of State Keith Krach visited Taiwan during the Trump presidency in 2020.

While the island of Taiwan is self-governed, China considers it part of its territory – leading to heightened tensions in the area that has been strained by the historical conflict. Taiwan's 23 million people live under the constant threat of invasion by China, which has vowed to one day re-seize it by force if necessary.
President Biden, on the other hand, expressed that the U.S. stance on the issue has not changed, according to a White House read out of the conversation. 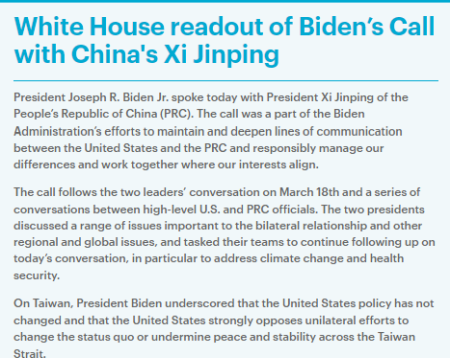 "Today I spoke with President Xi Jinping of the People's Republic of China as part of our efforts to deepen lines of communication, responsibly manage our differences, and address issues of mutual interest," wrote Mr. Biden on Twitter next an image (at top,) of him in the Oval Office on the phone with Xi.

Chairman of the Joint Chiefs of Staff Mark Milley said over the weekend that China has become significantly more aggressive – and a bigger threat – to the U.S. and its allies over the last five years.

"The message is the Chinese military, in the air and at sea, have become significantly more and noticeably more aggressive in this particular region," said Milley on Sunday during a stop in Indonesia.

This was the fifth call between two of the world's super-power leaders since Biden took office, which has seen tensions between the two nations reach a boiling point and the White House braces for a potential military response should the 82-year-old Pelosi visit Taipei, Taiwan.

The last time Biden and Xi last spoke was in March of this year, shortly after Russia invaded Ukraine.

When asked Wednesday about her upcoming trip, and whether she plans to go forward with making it, Pelosi said she would not comment on her movements for security reasons.

President Biden posted an image to his Twitter account from Thursday morning's 2-hour-long phone call with Communist China's President Xi Jinping – the 5th between the two since Biden took office. by N/A is licensed under N/A