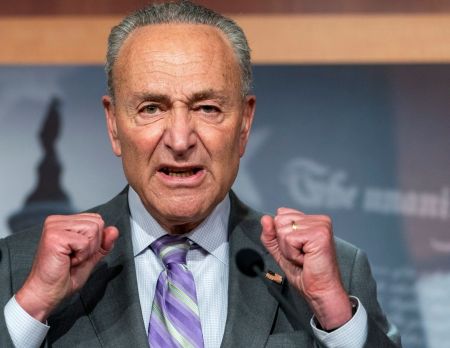 Senate Democrat Leader Chuck Schumer speaks to the press in the Senate Press Gallery in Washington, D.C. by N/A is licensed under N/A

“This is an incredibly challenging map for Democrats.”

Senators Joe Manchin of West Virginia (right,) John Tester of Montana, and Sherrod Brown of Ohio have something in common: They are the last Democrats to hold statewide elected office in states that have realigned Republican in the last decade. 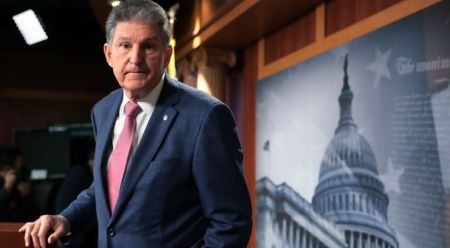 These endangered species are up for reelection in 2024 and will have massive targets on their backs as Republicans seek to take advantage of a more favorable Senate map.

Of the 33 seats up for grabs, Senate Democrats and "Independents" who caucus with them hold 23 of them.

Republicans need to defend only 10 seats.

“This is an incredibly challenging map for Democrats,” said Jacob Rubashkin, an analyst with Inside Elections, a nonpartisan campaign tracker.

“In a vacuum, this map is more challenging for Democrats than the 2022 map was – and the reason for that is just the total lack of realistic pickup opportunities for the party.”

While both parties had their fair share of pickup opportunities in the 2022 mid-term election, for Democrats the thrill of victory has been short-lived.

Senator Kyrsten Sinema’s post-election announcement that she was leaving the Democrat Party to become an independent put a damper on things, upending the 2024 political landscape. Sinema still plans to caucus with the party in the Senate, but has yet to indicate whether she plans to run for reelection.

What is clear is that she concluded she could no longer win a Democrat primary after thwarting the party’s base on various fronts, including her refusal to vote to abolish the legislative filibuster or support massive spending proposals. 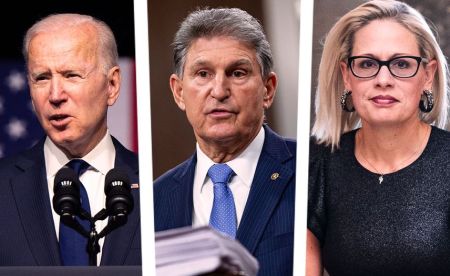 Ms. Sinema’s move further complicates the map for Democrats, and it has raised questions about what the party will do if she runs as an independent.

Republicans in the state, meanwhile, see it as a major pickup opportunity. Gov. Doug Ducey, who is term-limited, has been encouraged to run, while others are keeping a close eye on Kari Lake’s future plans in the wake of her gubernatorial loss.

Democrats now have to worry Ms. Sinema will split the vote if she runs as an independent, possibly playing into the GOP’s hands.

Mr. Rubashkin says the situation has added to the challenges confronting Democrats in 2024.

“If you look at the most competitive seats on this map, all of them are held by Democrats,” Mr. Rubashkin said.

“You have to squint very hard to find pickup opportunity for Dems on this map,” he said.

Democrats’ best opportunity of picking up a seat could be in Florida, where Republican Sen. Rick Scott is up for reelection. But that could be wishful thinking.

“The No. 1 pickup opportunity is probably Florida, which just voted for a Republican by 17%,” he said, referring to Gov. Ron DeSantis’ landslide victory for reelection last November.

Senate Democrat Leader Chuck Schumer speaks to the press in the Senate Press Gallery in Washington, D.C. by N/A is licensed under N/A