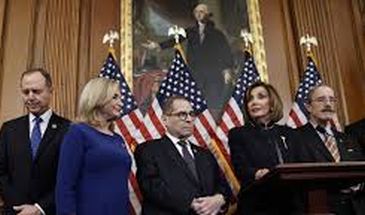 WASHINGTON D.C. (Texas Insider Report) We cannot name managers until we see what the process is on the Senate side... So far we havent seen anything that looks fair to us. Hopefully it will be fair said House Speaker Nancy Pelosi (D-CA) minutes after the House impeached President Donald Trump Wednesday evening throwing further uncertainty on the fire by refusing to say repeatedly when or whether she would send two articles to the Senate for a trial.

In a news conference intended to express Democrats somber closing message after voting to impeach Trump her comments came as a surprise.

Pelosi opened the press conference by praising her fellow Democrats for having moral courage" and said it was a great day for the Constitution of the United States of America."

But she then declined to say when she would send the articles of impeachment to the Senate.

Until the articles passed by the House are submitted to the Senate the Senate cannot hold the trial thats all but certain to clear President Trump.

Surprising those attending Pelosi said House Democrats could not name Impeachment Managers House Members who act as prosecutors trying to make the case for Trumps conviction and removal from office to the Senate until they know more about how the Senate will conduct a trial.

When we see what that is well send our managers" Pelosi said. And I would hope that that will be soon.

Rhode Island Rep. David Cicilline a member of Pelosis leadership team said after her remarks that Democrats want impeachment proceedings that are judicious and responsible and deliberative."