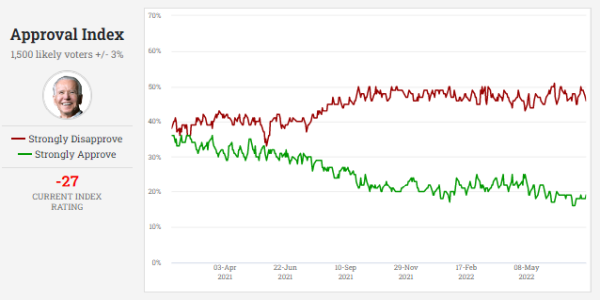 Biden 2024? Not Good for Democrats

WASHINGTON, D.C. (Texas Insider Report) — A new Rasmussen Reports National Telephone & Online Survey shows that barely 1-in-5 of "Likely U.S. Voters" think it would be good for Democrats to have President Joe Biden seek re-election in 2024, while most believe Republicans are headed for victory in the November 2022 Mid-Term Elections.

The newest Rasmussen Reports "Daily Presidential Tracking Poll" for Tuesday, July 26th, 2022 shows that:
The latest figures include:
Wonder how Rasmussen comes up with their presidential "Job Approval Ratings," since they often don’t show as dramatic a change as some other pollsters? It depends on how you ask the question – and whom you ask, says the polling firm.

And, after the Gallup organization quit conducting such daily polling surveys, Rasmussen Reports is the only nationally recognized public opinion firm that still tracks presidential job approval ratings on a daily basis.

They are also the only major national pollster who asks this question only of "Likely U.S. Voters," representing those who indicate they are "likely to vote" in the next election.

Daily tracking results are collected via telephone surveys of 500 Likely Voters per night, and are reported on a three-day rolling average basis. To reach those who have abandoned traditional landline telephones, Rasmussen uses an online survey tool to interview randomly selected participants from a demographically diverse panel.

Rasmussen has been a pioneer in the use of automated telephone polling techniques, while many other firms utilize their own operator-assisted technology (see methodology).

The margin of sampling error for this full sample of 1,500 Likely Voters is +/- 2.5%, with a 95% level of confidence. Field work for all Rasmussen Reports surveys is conducted by Pulse Opinion Research, LLC.