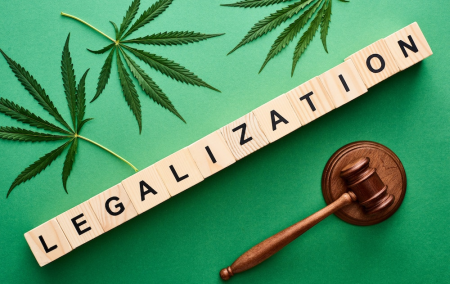 Research on the long-term health impacts of marijuana use show increased risk of several mental health conditions and respiratory complications, but supporters of state level legalization tout its economic benefits. by N/A is licensed under N/A
It's the ultimate public health exercise in weighing costs and "benefits"

Critics argue legalization increases accessibility and use of marijuana, which are linked to adverse health effects, especially among chronic users. Anticipated benefits and costs partially offset one another, but there is considerable uncertainty around both.

Proponents laud the benefits of legalization — greater access to marijuana’s medicinal properties, a new source of tax revenue and job creation, and a decreased burden on law enforcement.

Research on the health impacts of marijuana is limited and mixed.[2] Long term, heavy use is linked to increased risk of several mental health conditions and respiratory complications. Short term use may impair learning, memory and attention. Conversely, studies show marijuana is useful for treating symptoms accompanying chronic conditions such as pain, nausea, spasticity, convulsions, insomnia and post-traumatic stress disorder.

Supporters of marijuana legalization tout its economic benefits, including increased tax revenue. But states that have legalized and taxed recreational and/or medical marijuana earned on average just 0.8 percent of state revenues from it in 2020 (Chart 1). By comparison, sin taxes account for 2.8 percent of states’ tax collections.

While legalizing recreational marijuana may provide a small boost to New Mexico’s tax revenue, it will not materially change the state’s reliance on traditional industries, such as oil and gas. In addition, if consumers substitute marijuana for other taxed goods, realized revenues may fall short of projections. Marijuana tourism, meanwhile, could expand the consumer base and enhance tax revenues, benefiting the leisure and hospitality industry.

Some hope marijuana could become a substitute for harmful prescription drugs, playing a part in curbing New Mexico’s ongoing opioid epidemic. Proponents say that removing prohibitions on recreational marijuana sales will encourage investment in marijuana cultivation and retail outlets, creating jobs in construction, manufacturing and retail, as well as in ancillary industries such as professional and business services. A significant industry growth barrier, however, is its lack of access to banking services and credit due to the federal marijuana prohibition.

Ultimately, legalization is no panacea. Rather, it is an exercise in weighing costs and benefits and implementing an effective regulatory and public health oversight infrastructure.

Pia Orrenius is a Vice President & Senior Economist in the Research Department at the Federal Reserve Bank of Dallas, where Keighton Hines is a Senior Research Analyst.


Research on the long-term health impacts of marijuana use show increased risk of several mental health conditions and respiratory complications, but supporters of state level legalization tout its economic benefits. by N/A is licensed under N/A