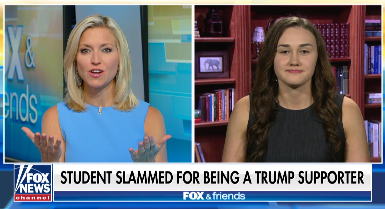 At the end of the day were all Americans and can unite behind that.

AUSTIN Texas (Texas Insider Report) When I saw that story (about Ellen DeGeneres & President George W. Bush being criticized for sitting next to each other at a Cowboys-Packers football game) I was blown away by how parallel it was to my story. Its crazy that in 2019 a talk show host and a former U.S. President cant sit together and share a laugh on camera without the outrage mob coming after them said McKenna Dallmeyer a student at Texas A&M University during a Fox News interview earlier today.

I think that whats really dangerous in our political climate right now is when we label each other with these false names and we dont have a conversation.

If we have conversations with each other and hear from the other side understand their point of view then we can have common ground because at the end of the day were all Americans and can unite behind that said Dallmeyer a CampusReform.org correspondent explaining to Fox News what happened to her after she followed a local dessert business on social media only to have the online leftist mob attack her for her social media posts supporting President Donald Trump.