Texas Democrats Upon Bonnen Announcement: We Have Fully Succeeded in What We Set Out To Do.

AUSTIN Texas (Texas Insider Report) With the release of the (Speaker Bonnen & Michael Sullivan) recording last Tuesday and with the Speakers announcement that he will no longer seek re-election we have fully succeeded in what we set out to do" said Chad Dunn the Democrat Party of Texas lawyer.

Case dismissed" said Dunn announcing the party would withdraw its lawsuit against Sullivan claiming the release of Sullivans secret recording of the June 12th meeting with Bonnen was the result of the lawsuit.

The scandal surrounding Sullivans secret recording of the June 12th meeting is already having political ramifications for next years crucial 2020 Elections an election in which Democrats are attempting to take back the Texas House of Representatives for the first time since 2003.

Now more than ever its clear that only the election of Texas Democrats will return ethics and good governance to our great state said Texas Democrat Party chair Gilberto Hinojosa (at right.)

The Dallas Morning News said Tuesday upon learning of Bonnens announcement that he would not seek re-election:

Bonnens error was in imagining that a person like Sullivan -- or name any other unelected political media personality -- was genuinely interested in a functioning majority.

When the fight is the point and when the factional division is what comes first there is no sense in trying to trade. 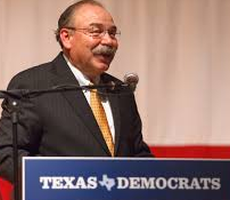 Potential political disaster for Texas Republicans is the result.

Its a perfect outcome for Sullivan and a terrible one for governance.

Looking ahead to 2020 the Republican Party of Texas must unite and work together to retain a majority in the Texas House.

To that cause I am redoubling my efforts to ensure we achieve that goal.

All Republican House Members have a list of accolades that makes them worthy of re-election and Ill work with each of them to tell that story to voters in their district."

The Texas Rangers are nearing the completion of their investigation into whether or not possible wrong-doings occurred during the June 12th meeting. Upon release of the Rangers findings the Brazoria County District Attorney Bonnens home county will decide whether to file criminal proceedings in the case.