IRS Job Posting Requires Ability 'To Use Deadly Force If Necessary,' as Democrat's Bill Would Hire 87,000 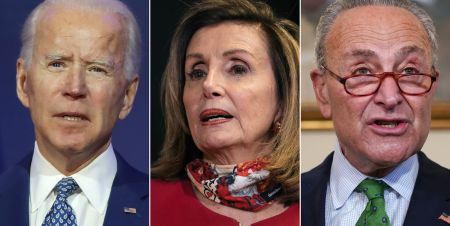 WASHINGTON, D.C. (Texas Insider Report) — A contoversial Internal Revenue Service (IRS) job posting for "Criminal Investigation Special Agents" within the the agency's Law Enforcement Branch drew quick and heated criticism Wednesday after the position's job description was discovered to include language listing as a "key requirement" being "legally allowed to carry a firearm," since "major duties" listed include being able to "Carry a firearm and be willing to use deadly force, if necessary" – as well as to "Be willing and able to participate in arrests, execution of search warrants, and other dangerous assignments." 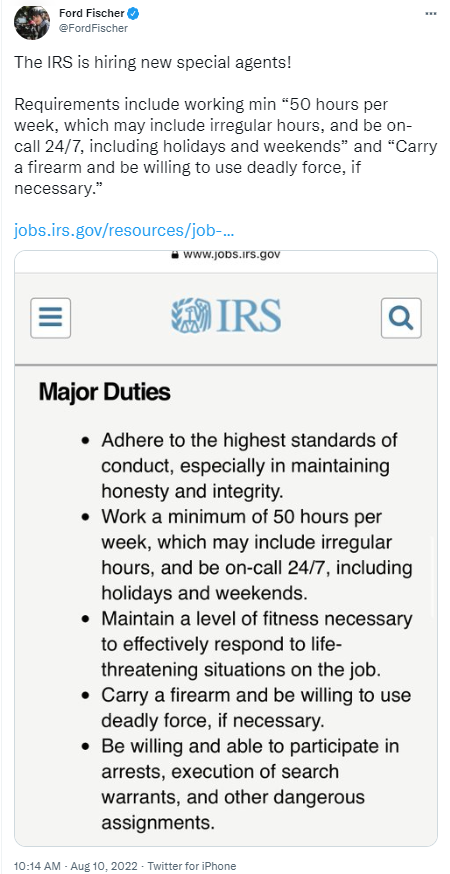 The uproar over the IRS's use of "deadly force" came as Republican's increased their criticisms over spending $80 billion during a recession to hire approximately 87,000 IRS Agents – which would more than double the IRS's total current workforce over a 10-year period – with more than half of the additional agents hired to help the agency crack down on tax evasion.

It also comes just days ahead of Friday's scheduled vote in the U.S. House of Representatives on the so-called "Inflation Reduction Act" – of which Democrat-Socialist Sen. Bernie Sanders said during Senate Floor debate:

"I want to take a moment to say a few words about the so-called 'Inflation Reduction Act.'

"And I say so-called, by the way, because according to the CBO (Congressional Budget Office,) and other economic organizations who have studied this bill, it will, in fact, have a minimal impact on inflation," said Sanders.

Republicans warn that the Democrat's bill funds an army of IRS Agents to conduct more than 1.2 million additional annual audits on Americans' tax returns, cracking down particularly on small business owners and lower-income workers who earn less than $75,000 per year.

"There is language in this bill that provides some guidelines, but it's not at all a guarantee," said William McBride, Vice President of Gederal Tax & Economic Policy at the non-partisan Tax Foundation.

"It indicates that the intent of the increased spending is not to target those earning less than $400,000, but 'intent' is a somewhat squishy word."

"The fact of the matter is, most returns report income under $100,000. That's where the money is, so to speak," said McBride.
The bill, packaged by Democrats under the title of the "Inflation Reduction Act of 2022," includes some $433 billion in new spending, and would raise an estimated $739 billion over the next decade by:
Revenue raised by the new initiatives and policies created in the bill, Democrats say, would go toward combating climate change, as well as toward efforts to reduce the nation's $30 trillion debt.

It while roughly $300 billion of the new revenue raised would go toward paying down the nation's deficit.

According to an analysis released by House Republicans, small business owners and lower-income working Americans are slated to receive 60% of the additional tax audits.

The analysis, which is a conservative estimate based upon recent IRS audit rates and tax filings data, shows that:

The Democrats' inflation bill also includes a provision from President Biden's original "Build Back Better Act" budget proposal that Sen. Joe Manchin stopped during the bill's previous negotiations, which he ultimately killed over concerns that the bill would dampen economic growth and worsen inflation.

"The proposed 15% minimum tax on corporate income is the most economically damaging provision in the bill," said the non-partisan Tax Foundation's analysis of the bill in December.

A separate analyses by the Penn Wharton Budget Model and National Taxpayers Union Foundation also concluded – as did Senator Bernie Sanders – that the "Inflation Reduction Act" would not reduce inflation.
In addition, the Joint Committee on Taxation (JCT) published a report Friday that showed most Americans, including those that make less than $10,000, would face increased costs as a result of the bill.

Democrats argued the JCT analysis was incomplete, and didn't factor in the bill's energy, pharmaceutical and health care cost reductions.

Senate Democrats projected that enhancing IRS funding could add an extra $124 billion in federal revenue over the next decade by hiring more tax enforcers who can crack down on rich individuals and corporations attempting to evade taxes.
"They'll need to increase the audit rates on middle-class and low-income folks to get the sort of revenues they're claiming from this," McBride said.

"People who don't have the resources get a letter in the mail from the IRS threatening them – what are they going to do?

"It might be an increase of a few bucks, a few hundred bucks that the IRS is requesting – and rather than go out and try to get a lawyer to fight it, they generally pay it," McBride said.

In response to the criticism about the expected uptick in tax audits under the bill, IRS Commissioner Charles Rettig said that "audit rates" will not increase relative to recent years.